SILVER IS IN SHORT SUPPLY.

Silver is in the early stages
of a fourth bull market.

The price of silver increased 800% in 13 months because of a shortage in the supply of physical silver. In the beginning, the big boys were the only buyers – taking delivery of silver by the actual ton. The general public did not get the fever till the very tail-end of the bull market.

It is happening all over again. Silver is acting just like it did in 1979. For the same reason. Supply. We are getting very close to the biggest silver-short-squeeze in history.  This time, instead of starting at $6, silver has established a new base line. If silver repeats its 1979-1980 performance performance in 2011, silver will head for $100 per ounce.

Supplies of physical silver (and gold) have
been going to Asia, into central bank vaults, and into
private hoards. What about buying some for your family?

Another excellent option is the 1 oz. Silver American Eagle coin. The new silver dollar is about the size of an old silver dollar, and contains exactly one Troy oz of pure silver. The coins come in plastic tubes of 20. 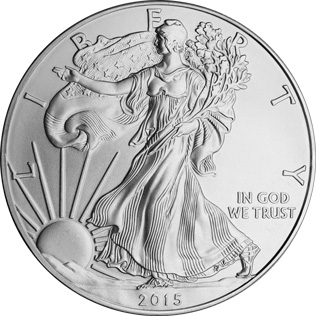 What better inheritance for your children and
grandchildren than United States silver coins?

Note:   Prices change from day to day and minute to minute. Actual prices will be confirmed at the time of an order, based on the markets at that time.